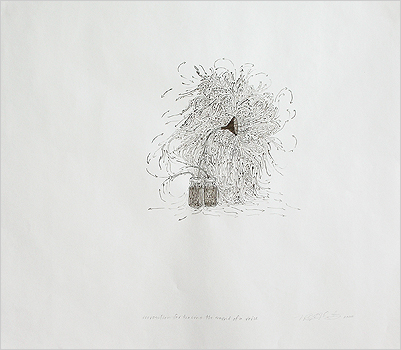 The mouth is a small opening capable of emitting an amazing array of sounds. The first drawings began with a kind of ‘garage’ version of the vocal apparatus using mason jars to stand in for the lungs, flexible hosing for the trachea and larynx, a funnel for the mouth. This apparatus provided the structure for organizing the lines depicting sounds. Once initial lines were drawn moving out of the apparatus, a kind of logic ensued: a pattern emerged describing a dimensional, undulating contoured surface in relation to and in spite of the apparatus.