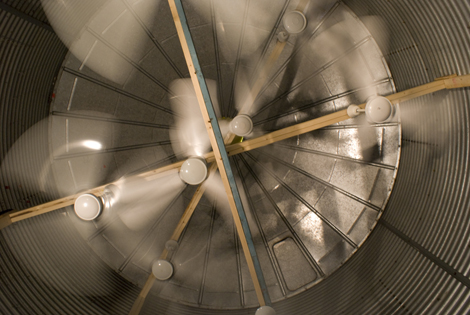 Mounted on each ceiling fan is one speaker and audio equipment. Sound is activated with a tilt switch (movement activated switch) when a fan starts spinning. The sound consists of two simple, hummed melody. Each two-minute recording is endlessly looped while the fan spins – six fans spinning six melodies to create a chorus. The spinning speakers give the audio a tremolo effect (like the spinning speakers of the Hammond organ) which varies based on the fan’s speed. Each fan is moving in the same pattern (controlled by a computer) but the staggered start time of each fan results in an ever-changing pattern.