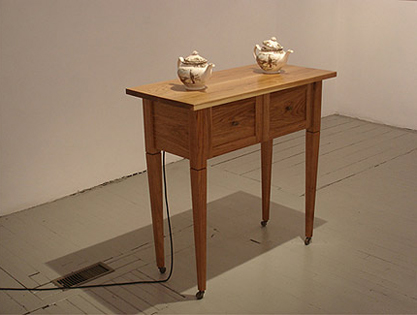 Sound is coming from two teapots set apart on a table to create a kind of ‘false’ stereo. The teapot lids are kinetic – the fast moving gestures create a kind of analog wah-wah effect (typically achieved electronically using an effects pedal. If the pedal is rocked back and forth, various specific frequencies are allowed to pass creating a sound something like when someone says the words “wah-wah”). The smaller gestures alter the resonant character of the teapot and change how much sound is emitted. The sound emitted is 49 seconds of signature Ry Cooder slide guitar taken from the opening scene of the film “Paris, Texas”. The guitar phrase cycles from a recognizable whole to fragments of various lengths and numbers of repetitions (according to a set compositional process) before returning to a recognizable whole again.