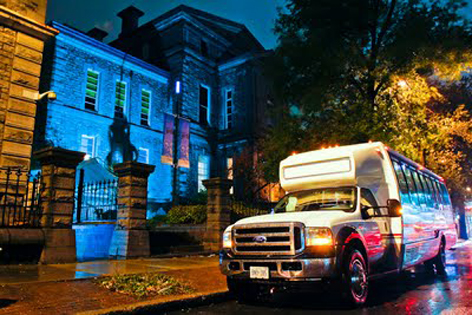 Two microphones are positioned on stands in the back seat of a car, one pointed at each open window. Given the space of a moving car, what happens to sound when recorded in this context? By this I mean the sound of the space of the car and the sounds occuring within this space, the sound of the car as a moving machine, and also the static and moving sounds outside of the car recorded from the perspective of a traveling microphone.

The microphone recorded sounds with clarity or with varying degrees of distortion depending on the speed of the car. The wind from the open window varyingly vibrated the microphone diaphragms (relative to the driving speed) creating the wind/microphone sound distortion that is so familiar. Combinations of the various sounds described above, with and without distortion, became the basis for the sound loops used in eight different sound objects for the project Nite Ride. The loop lengths range from 3 to 15 seconds.

A Case for Sound was used in the Nite Ride project to create one sound work. The Nite Ride project’s curatorial concept was to make “sound pieces for a nighttime driving experience. More than just new sound art pieces however, these works are designed to play over the course of a specific driving route which the artists have mapped out for the audience.”

The three titles – Following Piece, Drift, Meech Lake – refer to three different approaches to the driving route. Two routes are instructional and one route is specifically mapped to take a driver to Meech Lake. The launch for the project took place on a small bus – I wanted to make use of this social space, even though the bus was only present as part of the project for the first 8 days. From Artengine’s website the description reads…

…”The work she created for Nite Ride thus began as an exploration of the spatio-temporal experience of night driving, which she then carried forward through the various stages, architectures, geographies, and social spaces of the project. Bypassing the 5.1 surround sound system on the bus, Hlady produced a set of eight portable sound objects—square boxes the size and shape of LPs, outfitted with briefcase handles and speakers, and finished with the high-gloss urethane of acoustic stringed instruments. Each box contained a unique sound loop, a fragment that Hlady had recorded by placing two shotgun microphones in the back seat of her car and then driving around Ottawa with the windows open. The result is a hypnotic mix of music from her car stereo, traffic noise, wind interference, and occasionally even birdsong. Passengers on the bus further modulated these loops via a motion switch concealed within each box, which produced a sound effect similar to a skipping record”…

After the Nite Ride launch, A Case for Sound (Following Piece, Drift, Meech Lake) was recorded in a my studio with eight people participating. This version is available on Artengine’s site for download along with driving instructions.