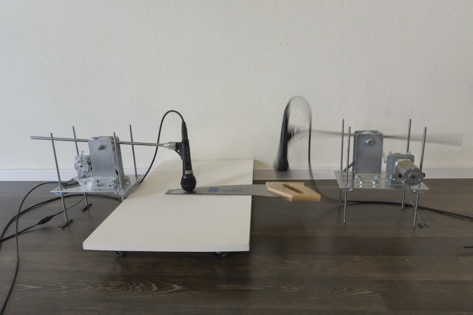 Photo: Count and Strike and Spin collaboration with Christof Migone

The Instrument Project is based on an on-going premise for sound collaborations developed by Hlady in which she takes some element of a collaborator’s practice and mechanizes it. Hlady’s own mechanical instruments are also part of the mix. The project asks questions such as: What would it be like to be surrounded by an instrument (an instrument that fully embraces being an apparatus, an assemblage of parts)? What if some of these instruments were kinetic, moved on their own? And what would happen if this instrument, with all of its parts, could be mobile, moved to different resonant spaces as a way to explore a variety of acoustic sites?

Christof Migone’s Hit Parade performance was the starting premise for Count and Strike and Spin, Strike On, Millionaire (machine), Strike and Hit.

Eric Chenaux’s work with spinning speakers in his solo recording and mouth speakers in the now defunct Rat-Drifting band The Reveries was the starting point for the current in-process collaboration: a series of field-recording-performances live mixed in Avatar’s studio using Mic Spin and Amp Spin machines. Previous collaborations with Chenaux include Soundball (Dancehauling), Smedaholmen Tourist (with Amplifiers), Marla Hlady and The Tristanos, Warm Weather.

Upcoming is a collaboration with composer and experimental performer Allison Cameron.