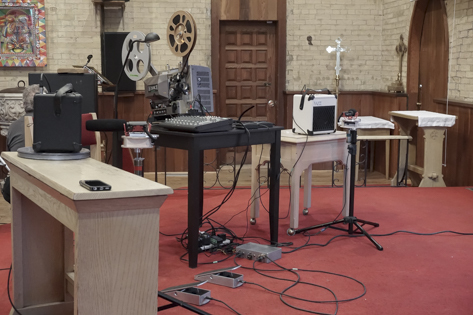 One speaker amplified the 16mm film soundtrack to Wings and Things. A second speaker amplified a contact microphone attached to the 16mm film projector. A spinning microphone machine was placed in front of each speaker. The machines were operated using speed control foot pedals. The sounds picked up by these turning shotgun microphones were sent to VibraFusion Lab’s audio-tactile system. Audience members were free to experience the sound through VibraFusion’s sound-as-vibration seating, or they could wander about the Music Gallery and listen from any perspective.

The film Wings and Things was directed by Robin Lehman with the soundscore and editing by Michel Fano and Jacqueline Lecompte. It is a film about model planes and the hobbyists who make them.

Visual cues from the film were used for composing the microphones’ movements.

Wings and Things was found in a pile of obscure films donated by the Mississauga Library System to LOMAA (London Ontario Media Arts Association) who share a work space with VibraFusion Lab.

See InterAccess Gallery’s Orchestra of the Tactile at The Music Gallery April 23rd, 2015.